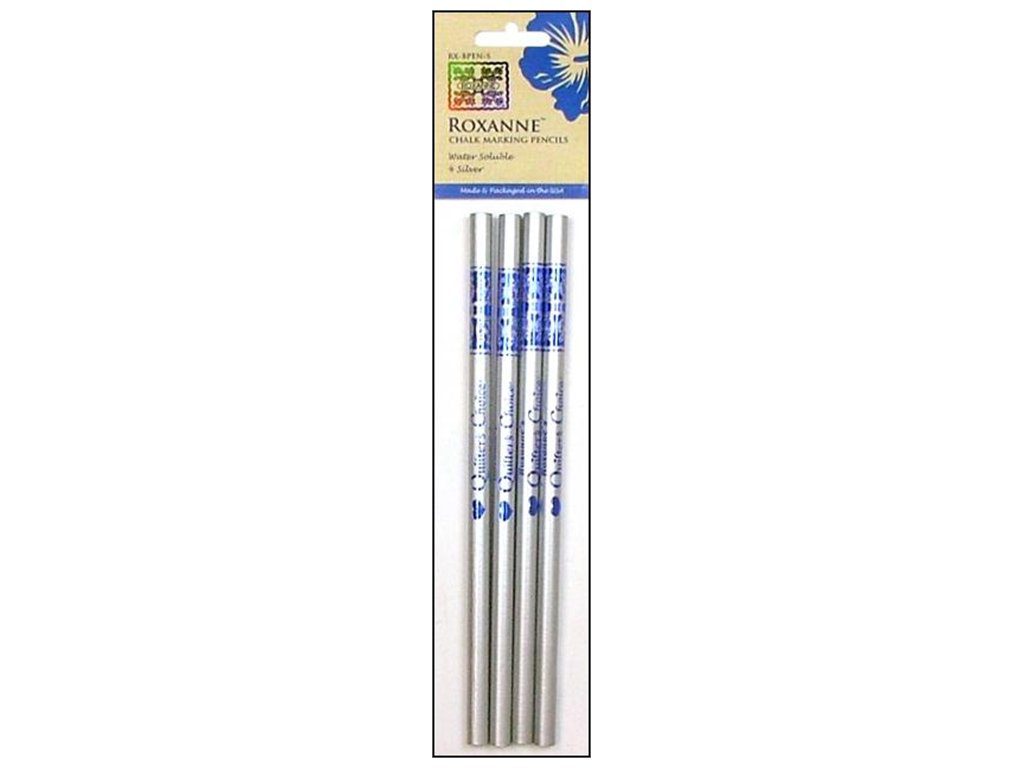 I think I’ve tried every method of marking quilting lines that has been invented. Each time I work on a quilt, I try a new method or a new pencil or a new marker. Some have worked reasonably well for light-colored fabrics, but proved to have hidden consequences like reappearing at a later time. And I hadn’t found anything I liked for dark fabric…until now. 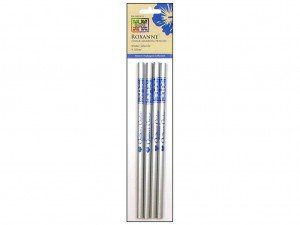 In preparing for a new applique design, I used a Quilter’s Choice Marking Pencil

(in white) for tracing the design onto my dark background fabric before using my fiskars rotary cutter. I traced all the lines of this detailed pattern at one time to see how well the lines would hold up to handling the fabric. As I worked, the lines remained as clear as the day I put them on.

So I decided to test Quilter’s Choice pencils, both white and silver, to see how they compare to all the other marking pencils I’ve collected over time.

The first test was to draw lines. On dark fabric, I drew with all the white marking pencils I have accumulated. The Quilter’s Choice white pencil went on easily, leaving a bright white line that was very easy to see. Another pencil put a line almost as clear and bright, but the others required going over and over the line to get it to show up even reasonably well.

On the white fabric, I drew with the Quilter’s Choice silver pencil, with a quilt-marking washable graphite pencil, and with a regular 0.5mm mechanical pencil. All these lines were clear and easy to see.

Then I decided to see how fine I could make the lines. I sharpened all pencils into a fine point…or at least I tried to. The Quilter’s Choice pencils sharpened perfectly the first time. Most of the others crumbled and had to be sharpened several times to get the point I wanted.

As I drew lines on the dark fabric, only the Quilter’s Choice pencil marked easily without much pressure. The others either required more pressure, making the lines heavier, or the points crumbled and had to be resharpened.

On the white fabric, all of the pencils drew fine lines easily. The 0.5mm mechanical pencil drew the finest, lightest line.

Next I tried the smudge test. I brushed my hand over the lines I’d marked on the dark fabric. All but two blurred significantly or brushed away. One of those two smudged a bit, and the other one — made with the Quilter’s Choice pencil –remained crisp and clear.

Because all the markers I used on the white fabric have to be washed out, the smudging and rubbing had no effect.

I reapplied the lines I’d rubbed away, then turned to the washing test for both the dark fabric and the light fabric.

First I just put them each in plain cold water. With a little swishing around, the Quilter’s Choice pencil lines disappeared almost completely. The other lines were still visible.

Next I tried soap. After the soap washing, there was no sign of the Quilter’s Choice pencil marks, but the others had left behind ghost images. The one exception was the 0.5 mm mechanical pencil, which had lightened somewhat but remained clearly visible.

At that point I was pretty much sold on Roxanne Products’ marking pencils, ready to give up all the others. But the next day I decided that in some circumstances, the ability to brush away your lines might be an advantage.

If, for example, you were working on a wall hanging that could not be washed for any reason, you would need an easy way to remove the lines. So maybe Quilter’s Choice isn’t the only solution you need. So back to the testing…

I reapplied the Quilter’s Choice pencil lines and tried to brush them away. No dice. Next I dampened a cloth to wipe the lines. The white lines came off the dark fabric easily, with no tell-tale signs.

But the silver lines on the white fabric didn’t perform as well. The lines, though significantly lighter, were still visible — though not any more visible than the 0.5mm mechanical pencil after a soap and water washing.

I think my hunt for a complete marking solution is over. I plan to stick with Roxanne Product’s Quilter’s Choice Marking Pencils for everything I do, unless the project is on light fabric and absolutely can’t be washed. In that case I’d probably use masking tape instead of any marking pencil.

Shannon has been and avid quilter for over 20 years. Her love of quilts came at an early age from her grandmother. She is a mother of 2 and lives in the US with her loving husband.

Find me on social media